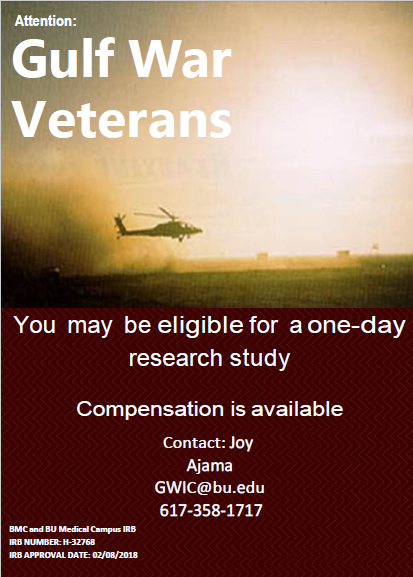 What is Gulf War Illness?

Gulf War Illness (GWI) is a disorder characterized by multiple persistent symptoms such as chronic headaches, widespread pain, cognitive difficulties, debilitating fatigue, gastrointestinal problems, respiratory symptoms, and other abnormalities that are not explained by traditional medical diagnoses or post-traumatic stress disorder. This complex set of chronic symptoms may affect as many as 200,000 to 250,000 veterans of the 1990-1991 Gulf War, out of the nearly 700,000 deployed to that region.

The Boston GWI consortia is conducting cutting-edge pre-clinical (animal/cell studies) and clinical research with veterans at several leading universities, Department of Veterans’ Affairs and civilian hospitals at nine study sites across the US and Australia. The main focus of the GWIC is to identify biomarkers of the disorder and to develop targeted treatments for ailing Gulf War veterans.